Massive increase in passenger numbers on the urban network

PostBus continues to grow in pleasing manner in France. In June this year, the transport company won yet another bid for an express line in the Isère region, proving significant success in Villefranche-sur-Saône, north of Lyon. And only a year after commencing operation of its existing urban network a very positive balance is revealed: Frequency increase of around 30 percent and 15 percent turnover increase as compared to 2010. PostBus has thus confirmed its competitive ability and underscores the selected growth strategy in France. 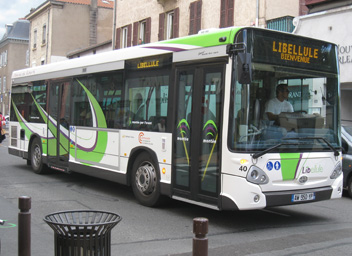 In the urban Villefranche-sur-Saône region, PostBus was able to meet a 30 percent increase in demands within only a year. Turnover also increased by around 15 percent during the same period. In January 2010, PostBus was awarded a preliminary 6-year contract through the local urban authorities, summarized under the abbreviation CAVIL. The contract comprises five regular bus routes, four school bus routes and a call bus. Expected figures for 2011 cover a route network of approximately 1,100,000 kilometres with estimated 4,855 passengers daily, transported by a total of 71 drivers and 31 vehicles. According to plan, turnover for the year is estimated in the region of 4.7 million Euros.

Successful implementation according to Swiss system

The CAVIL (Communauté d’Agglomération) of Villefranche-sur-Saône in the Rhône region is made up of five communities with a total of around 54,000 inhabitants. On request on behalf of the responsible local authorities, PostBus restructured its entire network on 23 August 2010. Thereby, implementation of Switzerland’s renowned and successful intermodal system was relied upon – with ideal train connections to and from Lyon and Dijon guaranteed.

PostBus has been active in the French market since 2004 and operates six urban networks, as well as holding five permits for intercity routes. With 270 vehicles and approximately 475 team members, the company achieves an annual turnover in the region of 40 million Euros. As of September, with the introduction of the new express line in the Isère region, PostBus further extends its existing network in France and will employ an additional 28 team members and 21 vehicles. This success story is based on the quality of its offers, good references concerning the route network already established in France and renowned reliability of the daily PostBus services on its home ground in Switzerland.