From mediamatics technician to composer

Former apprentice Nick Wüthrich has created the new stop jingle for Postbuses. It’s based on the traditional three-tone horn.

What Rosamunde Pilcher is to romance novels, the three-tone horn is for public transport: a catchy tune that stirs emotions. On mountainous postal routes, the three-tone horn is used as a warning sound to oncoming vehicles, and warms the hearts of passengers at the same time. The recognition effect of the so-called stop jingle that precedes stop announcements is far more modest. Until now, it was a twin tone with an echo. According to the Marketing department, the audio logo should – without being intrusive – emerge from the shadows and strengthen the PostBus brand.

It had a new stop jingle produced in-house. The mediamatics apprentice Nick Wüthrich (21) received the PostBus three-tone sound with the notes C sharp, E and A in A major as a template.

The result is a restrained 3-second jingle (see online audio sample). “The jingle shouldn’t impose upon the passengers, it should be recognizable but inconspicuous. It should also be recognizable as a public transport signal sound, which is why I don’t want to reinvent the wheel,” says Nick Wüthrich about his piece. You’ll be able to hear the jingle in certain Postbuses in the coming weeks and little by little it will be rolled out on almost all routes, meaning it will ring out hundreds of thousands of times every day. For Nick, from Berne, this was the culmination of his apprenticeship. The fledgling mediamatics technician is now an independent music producer. Under the stage name SlasherBeats, he composes instrumentals for musicians.

Here’s how the old and new audio logos sound: 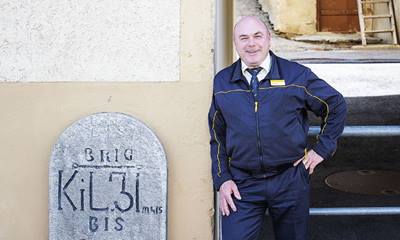 “I get my love for numbers from my mum, and my ambition from my dad.”