“We want to achieve fossil-free mobility in parcel delivery”

The development of battery and vehicle production is progressing at a rapid pace. This is why Thomas Ernst, Head of National Transport and Procurement at PostLogistics, believes that full electrification of most of Swiss Post’s fleet is an entirely realistic goal.

You deal with e-mobility every day in your work at Swiss Post. What do you find fascinating about it?
I am fascinated by the challenge of achieving fossil-free mobility in parcel delivery – despite all the obvious and hidden obstacles.

What challenges are you talking about?
It seems to me that some vehicle manufacturers still have little interest in manufacturing electric commercial vehicles – except for some commendable exceptions. Suppliers and garage owners are coming under pressure, because e-vehicles are significantly easier to maintain.

How do e-vehicles prove their worth in Swiss Post’s everyday routines?
Eight specially upgraded e-delivery vehicles have been doing the delivery rounds in Hinwil, Oerlikon and Basel since June 2017: our drivers, management at our bases and our customers continue to be impressed. The vehicles are easy to use, which guarantees a quiet and smooth ride. Instead of using the brake pedal, all you need to do is take your foot off the accelerator.

Swiss Post wants to convert its delivery vehicle fleet (up to 3.5 tonnes) to e-power by 2030. Is this a realistic goal?
When I look at the development in the production of batteries and vehicles, I believe that it is an entirely realistic goal for the majority of the fleet. This requires disposable investment volume, however.

The scooter fleet used for delivering letters is already electrified. How much progress has been made in parcel delivery?
The required electrical planning in the four largest cities, Geneva, Berne, Basel and Zurich, was completed in mid-2019. Following that date, 11 e-delivery vehicles from MAN were also delivered. Ten Chinese e-delivery vehicles are set to be delivered in the second half of the year.

What is your response to criticisms of the production and disposal of batteries?
With regard to the components, size and lifespan, the development of battery production is still far from complete. Instead of disposing of batteries, Swiss Post is developing solutions to use them as energy storage units in photovoltaic systems. Similar concepts will certainly continue to be developed in the future.

And what will happen to the decommissioned fossil-fuel driven vehicles?
Post Company Cars, the Swiss Post subsidiary for fleet management, will return them to the manufacturer according to fixed purchase agreements. They will then be sold on the second-hand market.

When it comes to reducing CO2 emissions, the key is not just the drive technologies, but also the energy that is used. How is Swiss Post doing in this area?
Since 2008, Swiss Post has procured 100 percent of its electricity from renewable sources; and since 2012, all of its energy been sourced from Switzerland. The electricity comes from water, wind and solar energy and from biomass. As a state-owned company, we are setting an example in this respect.

Will Swiss Post’s trucks also be powered by electricity in the future?
As we stopped using our own trucks in 2016, we are focusing on the fleet of delivery vans for delivering parcels. One of our transport partners, Hugelshofer Logistik AG in Frauenfeld, has been transporting parcels with the first fully electric articulated lorry from MAN since the beginning of June. I personally think that the tendency will be to use medium-sized e-trucks for short-distance deliveries. Hydrogen power dominates national transportation in the 40-tonne range. Concrete solutions for this are on the horizon from 2023. 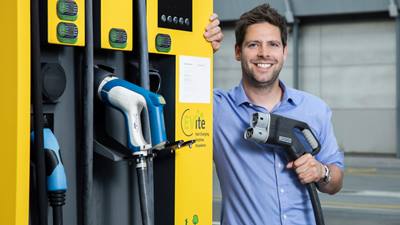 Is the future electric? 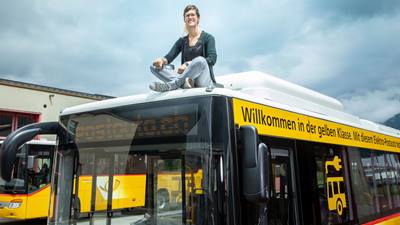