Field post during the coronavirus pandemic: emotions, happiness and chocolate for soldiers

A splash of yellow to brighten the everyday lives of those in uniform: during the first emergency deployment of the army since the Second World War, the field post played an important role for the roughly 5,000 soldiers providing support services. It supplied the soldiers with thousands of parcels containing clean clothes as well as greeting cards and food parcels.

Up to 15,000 soldiers were on duty over the past six weeks – in addition to the regular refresher courses and recruit schools, which came to an end last Friday, about 5,000 soldiers were part of the first emergency deployment in 75 years with a view to providing support during the coronavirus crisis. “Only a few weeks ago, no one in their wildest dreams could have imagined this scenario, the largest mobilization of troops since the Second  World War,” says Colonel Fritz Affolter, Head of Military Field Post, The soldiers on active peacetime military duty were supplied by 80 members of the field post with parcels, letters and freshly washed clothes, as they did not leave their barracks for six long weeks.

“At times we handled eight times more parcels than usual,” says Fritz Affolter. In peak periods, that represents an additional 40,000 field post parcels per week. “The soldiers were called up by SMS, so they forgot numerous items which had to be delivered to them during the first few days of their support service,” explains Affolter. This increased volume was compounded by hygiene requirements due to coronavirus and the extra-long days caused by the huge letter and parcel volumes. The past few weeks might have been “extremely demanding and energy-sapping, but the team was incredibly motivated!” What’s more, “As we saw the soldiers’ joy when they received underwear, greetings and food parcels, that simply gave us even more motivation,” he adds.

But it was not only their families and friends who supported the soldiers; entire school classes drew and wrote letters for the soldiers who were on special duty during these extraordinary times.

One of the thirty field post support bases in Switzerland is the Frauenfeld military base. In recent weeks, it also served as the mobilization location for the medical corps in eastern Switzerland, which was on coronavirus duty. Together with the regular recruit school which was forced to move into accommodation both in the immediate vicinity and further afield due to a lack of space, this created a major challenge for the field post: 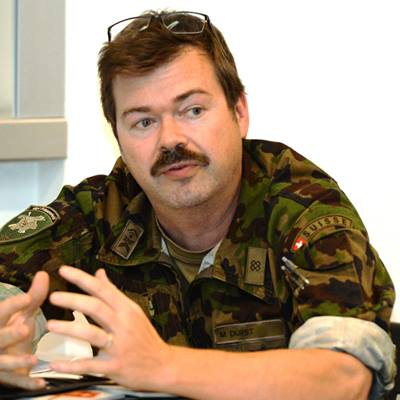 “At the counter in the barracks, we could only accept the PostFinance Card for payment transactions,” explains Adjutant NCO Matthias Dürst, who has been with Swiss Post for 36 years and has worked as Head of Field Post at the Frauenfeld military base and environs since 1992. This led to bottlenecks in the supply of cash for soldiers, as they were never allowed to leave the barracks to use a civilian ATM at the end of the day. The solution was for banks to install mobile ATMs in certain barracks. The army was also keen to mitigate the situation and arranged for an pay supplement of 5 francs per soldier and per day to be paid in cash every 10 days.

And then, on Saturday, 4  April 2020, one week before Easter, several heavy parcels from a chocolate manufacturer based in the Bernese Jura found their way to the Frauenfeld barracks. They contained a wide selection of chocolates in all shapes and colours. According to Matthias Dürst, the problem was that, “Unfortunately none of them had a cover letter or delivery note, let alone any other useful indication of who the potential end recipient could be.”

Without an end recipient, the field post is not allowed to pass consignments on. And simply distributing consignments to all the soldiers in the barracks is prohibited by the rules concerning the acceptance of donations and gifts to the army. The competent authorities in Berne investigated the matter and on Tuesday announced that the person who had prepared the consignment had been located and that the intended recipient was “Gruss, San Sdt” As Head of Field Post at Frauenfeld, Matthias Dürst followed the matter up at the Switzerland office and made a breakthrough. There are actually six soldiers in the ranks of the Swiss Army with the surname “Gruss”, but none of them was currently on duty. And so the inevitable happened: the mountain of chocolate was distributed to all the members of Hospital Battalion 75. “They were delighted to receive it,” says Matthias Dürst. The answer to the mystery: one of the medical orderlies had presumably written a card to the chocolate manufacturer to ask for some chocolates for his unit, ending with the words “Gruss, San Sdt”.

At the weekend, the recruit schools came to an end while about half of the soldiers on coronavirus duty were allowed to go home. For the soldiers continuing to provide coronavirus support, everyday life in uniform goes on – and will continue to be brightened up by the parcels and letters delivered by the field post.

Reading during the coronavirus pandemic

Over 17 million: Swiss Post processed more parcels than ever in April 2020