“I was finally able to have my say”

Germaine Zenhäusern is the daughter of the first woman to vote in Switzerland. She recalls how courageous the women of Unterbäch were at that time and how politics has shaped her life since.

A remarkable event took place in the village of Unterbäch in Upper Valais on 3 March 1957. During the municipal vote on mandatory civilian service for women, 33 of the 88 women in the village went to the ballot box. This illegal campaign was initiated by Paul Zenhäusern, who was president of the Unterbäch Communal Parliament at the time, and Peter von Roten, the husband of women’s rights campaigner Iris von Roten. The votes were never counted. Katharina Zenhäusern became the first Swiss woman to cast a vote at the ballot box. She died in 2014 at the age of 95.

Ms Zenhäusern, are you proud of your mother?

Absolutely! All 33 women who took the courageous step of going to the ballot box were incredibly proud of what they’d done. Even my 80-year-old grandmother was there. She also took a lifelong stand for equality.

“Even the New York Times reported on it.”

You were just six years old at the time. Do you remember anything about it?

Yes, I remember all the excitement in the village! There was also a lot of frenzied activity in our living room. There were lots of journalists asking questions and also a TV camera team. Even the New York Times reported on it.

How did local people react?

There were two political parties in the village at the time – the CVP and the CSP. If one party supported an issue, the other opposed it, and vice versa. People who were opposed to the idea of women voting voiced their disapproval loudly. But everyone is entitled to express their opinions.

Why was this courageous action taken in your village of all places?

If men couldn’t find a job at Lonza, they would seek work further afield. As a result, the women had to take care of the farming and the children on their own. This meant the women of Unterbäch were extremely independent and very self-assured.

How important was politics in your home life?

There was always lively political debate at the table in our house. My mother had always supported gender equality – equal pay and maternity leave. She also believed women needed to become more united. Things are different today – there are now lots of networks advocating for women’s issues.

When was the first time you voted?

I was finally able to have my say at the age of 20! From childhood, I’ve always seen equality as something that’s beyond dispute. Since then, I’ve never missed an opportunity to vote – except once, when I was on holiday.

This event and my environment have clearly shaped me. Politics affects all areas of life. While I didn’t enter politics directly, I’ve always been involved with women’s issues and women’s associations.

What are your hopes for young women?

I’d really like to see more female members of parliament. They could achieve a great deal in a short space of time, which would ultimately benefit all women. 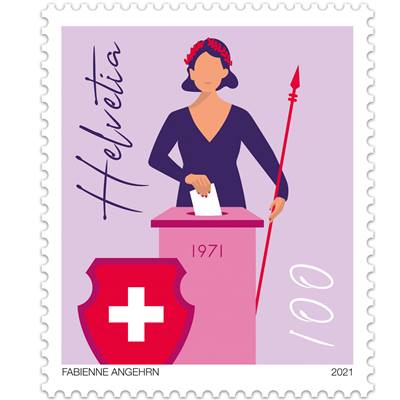 A total of 16 votes were held on women’s voting rights in Switzerland before suffrage was finally approved at national level on 7 February 1971. Swiss Post is issuing a stamp to mark the 50th anniversary of women’s suffrage.

The anniversary stamp can be found at postshop.ch